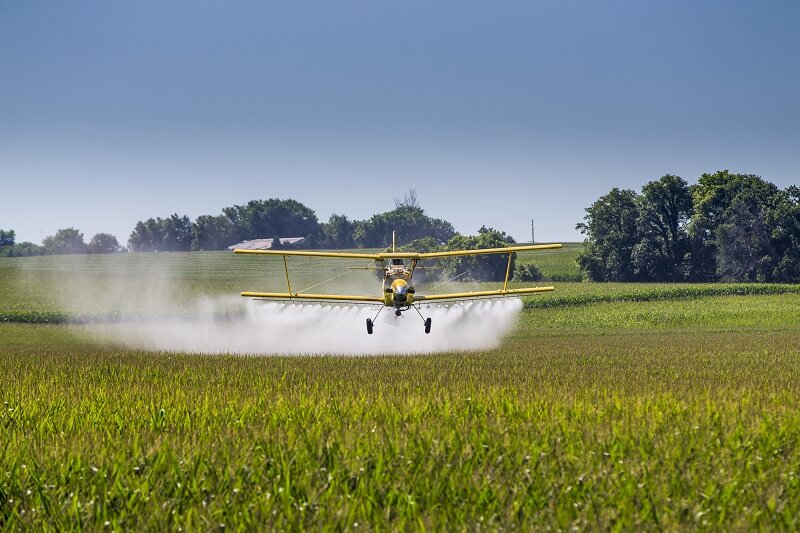 Pesticides are chemical or biological agents that are used in order to protect crops from insects, weeds, and diseases

Pesticides are used on fruits, vegetables, wheat, rice, on olives and canola grown so as to be pressed into oil, and non-food crops such as cotton, grass, and flowers.

The most common way that the majority of infants, children, and adults are exposed to pesticides is by ingesting them in the form of foods. Some people who work in agriculture or others touch and inhale pesticides, which puts these persons at risk of acute chronic poisoning.

The United Nations Food and Agriculture Organization’s International Code of Conduct on the Distribution and Use of Pesticides states that a pesticide is “any substance or mixture of substances intended for preventing, destroying or controlling any pest, including vectors of human or animal disease, unwanted species of plants or animals, causing harm during or otherwise interfering with the production, processing, storage, transport, or marketing of food, agricultural commodities, wood and wood products, or animal feedstuffs, or substances which may be administered to animals for the control of insects, arachnids, or other pests in or on their bodies.”

Pesticides are classified as a function of certain of their principal characteristics, such as acute toxicity, half-life, chemical structure and use. In 1978, the World Health Organization (WHO) established a classification based on the hazard that a pesticide poses or its degree of acute toxicity, defined as the capacity of the pesticide to produce acute harm to health through single or multiple exposures over a relatively short period of time. Toxicity is measured through its mean lethal dose (LD50) or mean lethal concentration (CL50). Both parameters vary based on multiple factors such as the presentation of the product (solid, gel, liquid, gas, powder, etc.), the means of entry (oral, dermal, respiratory), temperature, diet, age, sex, etc.

Agriculture is the activity that makes the most use of this type of compounds, consuming 85% of world production, with the aim of chemically controlling the various pests that lower the quantity and quality of harvests of foods and of other plants. 10% of total pesticide production is used in public health activities for the control of vector-borne diseases such as malaria, Chagas disease or dengue, among others. Pesticides are also used for the control of rodents, in water potabilization, and in the eradication of crops whose final products are illicit drugs. In addition, they are used for controlling pests in large structures such as shopping malls, buildings, planes, trains, and ships. They are applied in ornamental and recreational green areas such as parks and gardens to control the proliferation of insects, fungi, and the growth of weeds and underbrush. For that same purpose, they are spread along highways, railroad tracks, and high-voltage electricity line towers. In natural or artificial water reserves, pesticides are used to prevent the growth of weeds, algae, fungi, and bacteria. They are profusely used in industry for the manufacture of electrical equipment, refrigerators, paint, carpets, paper, cardboard, and materials for packaging food, among other applications, to prevent the development of bacteria, fungi, algae, or yeast in these products or to keep these products from being damaged by insect and/or rodent infestations.

Pesticides are chemicals that have contributed benefits to human beings, basically in the realm of public health and agriculture. At present they continue to be first-choice resources in many activities of these specific areas. Nonetheless, not only human beings, but also mammals and the environment have been substantially harmed by their indiscriminate, excessive, and often careless use. It is therefore important to provide information and promote the rational use of pesticides both in the work environment and among in the general population, as well as to promote research regarding the production of these compounds so as to develop products that are harmless to human beings and their environment. It is also necessary and relevant to advance in researching the possible harm to human health resulting from prevalent exposure to pesticides.

The Environmental Protection Agency (EPA), the Food and Drug Administration (FDA) and the United States Department of Agriculture (USDA) pay a role in the measurement and regulation of pesticides in foods. The EPA regulates pesticides by enforcing the 1996 Food Quality Protection Act. This agency registers all pesticides in use in the country, evaluates potential effects of new pesticides and their proposed uses, revises pesticide safety measures currently in use, registers all pesticide producers, and enforces requirements for the respective pesticide’s uses. The EPA has issued strict safety standards for pesticides that affect infants and children, and has restricted the residential use of many OP’s with the aim of reducing their harmful effects on infants. The FDA supervises the safety of food supplies in the USA, which includes monitoring the quantity of pesticide residue in them. The USDA National Organic Program establishes labeling standards for raw, fresh, and processed products that contain organic agricultural ingredients. The USDA Pesticide Data Program compiles, analyzes, and reports on the existence of pesticide residue in agricultural products that form a part of the food supply of the USA, in particular in foods commonly consumed by infants and children.

Most countries, including the United States, regulate the quantity of pesticide residue permitted in a given crop. The allowable quantity of pesticide residue for a crop in a given country may or may not be the same as what is permitted for the same crop in another country. Generally, imported crops are subject to the regulations of the country that accepts the crop. Importers that have questions on pesticide residue in crops should contact the Regional Environmental Protection Office (EPA) corresponding to the place where the imports will enter the United States.

Maximum Residue Limits (MRLs) are defined as the maximum concentration of pesticide residue (expressed as mg of residue/kg of food/portion) that could possibly occur when the pesticide has been applied in keeping with Good Agricultural Practices (GAP) following the recommendations of the label and considering environmental conditions. The MRLs, in principle, are commercial standards, but are set in order to ensure that the residue does not pose an unacceptable risk for consumers.

The Codex Alimentarius has defined pesticide residue as any substance or substances present in a food product intended for human or animal consumption resulting from the use of a pesticide, also including any specific derivative produced by degradation or conversion that is considered toxicologically significant. The levels of residue in agro-foods products directly depend upon proper use of the pesticide in their primary production in relation to factors such as dose, frequencies of application, interval between the last application and the harvest (known as the waiting period), as well as the chemical nature of the compounds and their degradation, the characteristics of the formulations used, the characteristics of the crop and of its management, as well as climate conditions. With the aim of protecting consumers, countries have established standards and regulations ranging from requirements for registration of the pesticide and the establishment of Maximum Residue Limits, to the most diverse types of restrictions and limitations on their use. These standards are intended to make consumer protection compatible with phytosanitary protection of the crops. The Maximum Residue Limit, or tolerance, is the maximum quantity of residue of a given pesticide permitted by law on a given product. In other words, we could call it the allowable concentration of a pesticide on a given food acceptable for consumption in the long term, resulting from the standardized use of that pesticide under phytosanitary programs. It is important to note that this is a legal concept, and that the figures expressed in the MRL are not necessarily indicative of the pesticide’s toxicity. In fact, their calculation, together with toxicological aspects, considers residue levels resulting from the approved agricultural practice as well as data on consumption of the food and the evaluation of the suitable consumer protection level. At a worldwide level the FAO and the WHO, through the Codex Alimentarius Commission, propose MLR’s to governments for their acceptance, in order to promote their harmonization and thereby facilitate international trade in foods. These standards have taken on special importance in the international context due to their recognition within the Agreement on the Application of Sanitary and Phytosanitary Measures of the World Trade Organization.

In order to ensure food safety and customer confidence, suppliers of agro-food products are demanding unregulated requirements for pesticides. Such is the case of protocols or Good Agricultural Practices codes in which obligations with respect to the phytosanitary management of crops represent the majority of the total. The Good Agricultural Practices (GAP) were developed with the purpose of preventing the risks associated with the primary production of foods and controlling of processes. The GAP’s set forth the conditions and operating practices recommended to ensure safety, environmental protection, and the welfare of workers, taking a preventive approach to the entire chain. The first GAP’s developed, especially as hygiene codes, primarily focused on the prevention of microbiological risks in the various stages of agricultural production, harvest, and post-harvest, with an emphasis on risks involving water, organic fertilizers, and workers.

AGQ Labs is an ISO 17025 accredited laboratory that offers one of the most comprehensive pesticide residue analysis and testing services in the United States. Using state-of-the-art analytical equipment, AGQ Labs performs pesticide residue analysis quickly and accurately in our Oxnard, CA facility. Included in the cost of service is access to our team of food safety experts and lab managers who have many years of experience interpreting pesticide residue results and addressing issues that can occur.

Do not hesitate to contact our Food Safety department for more information.