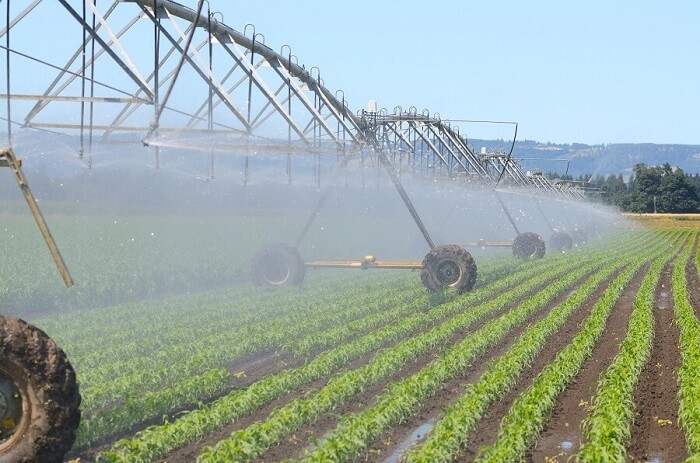 The most common risks, which form the basis for evaluating the effects of water quality, are the related to:

Irrigation water applied to soil partially infiltrates the soil, while the remaining irrigation water is retained by the soil itself. The retained portion is what contributes salts to the soil. This concentration of salts is due, on the one hand, to direct evaporation, and, on the other, to extraction of water by the plants’ roots. The magnitude of salt accumulation in the soil depends upon water quality, as well as irrigation management and drainage efficiency. Excess salt accumulation in the soil’s root zone (salinization), affects the crop’s absorption of water through osmotic mechanisms, increasing the plant’s consumption of energy for extracting water, and thus resulting in lower yields.

When evaluating salinity, the quantity of ions in the water should be determined. Some of the factors that have been used for quantifying them have been:

When the pace of irrigation water infiltration reduces appreciably, or when water remains on top of the soil for too long, or when water infiltrates very slowly, the water consumed by the crop does not replenish. In such case, the crop does not receive the water it needs to produce an acceptable harvest. Infiltration of water in the soil depends on water quality, as well as on the soil’s physical characteristics (such as structure, degree of compacting, organic matter content, texture, type of minerals in the clays) and on the soil’s chemical characteristics, such as exchangeable cations.

Losses occur due to:

Calcium and magnesium are the most abundant cations dissolved in the soil or involved the soil change process in arid and semiarid zones where irrigation is used. Frequently, irrigation waters contain high concentrations of sodium, which tends to partially replace divalent cations in the change process. Some physical properties of soils, such as particulate dispersion, soil structure, and stability of the aggregate, are closely tied to the types of exchangeable ions. Divalent ions (and calcium in particular) provide physical characteristics that are favorable to soils. Absorbed sodium, on the other hand, results in dispersion and swelling of clays, and when its proportion is too high, causes dispersion of the soil and reduces its permeability.

The indexes proposed for evaluating problems related to water infiltration in the soil, geared toward predicting the risk of sodification or alkalization that irrigation waters might provoke, have undergone greater and more significant changes than what is seen in the case of salinity. These changes endeavor to also account for factors involving precipitation and dissolution occurring in the soil. They also seek to establish a relationship with the percentage of exchangeable sodium.

When soluble salts are present in the root zone, certain specific ions are absorbed that, accumulated in plant tissues, could end up provoking toxic effects for the plant. They hinder normal development, resulting in a reduction of yields, and in more acute phases, could even cause the plant’s death.

In irrigation waters, the most common ions that might cause toxicity problems are chloride, sodium and boron, although there is a notable variation in toxicity thresholds among the various plant species. Certain oligoelements (for example: Mn, Zn, Cu, Ni, Co, Cd) can also be toxic for plants and/or for human beings even in very low concentrations if they accumulate in the parts of the plant utilized as food. The presence of these oligoelements tends to be minimal in natural waters, but not so in wastewaters that, subsequent to various degrees of treatment, might be used for irrigation or be discharged into surface waterways and later used for irrigation.

At AGQ Labs we are specialists in agricultural chemistry. The great value that AGQ Labs contributes to the agricultural sector lies in combining this knowledge of chemistry with specialized engineering. Our team of agronomists is comprised by professionals with experience at the world’s finest farms. All of our agronomical decisions are based on analytical information obtained from our internally developed monitoring and control procedures. We are experts in the control of soil-plant-water systems.

Visit our web site for more information on our Irrigation Water Analysis services.