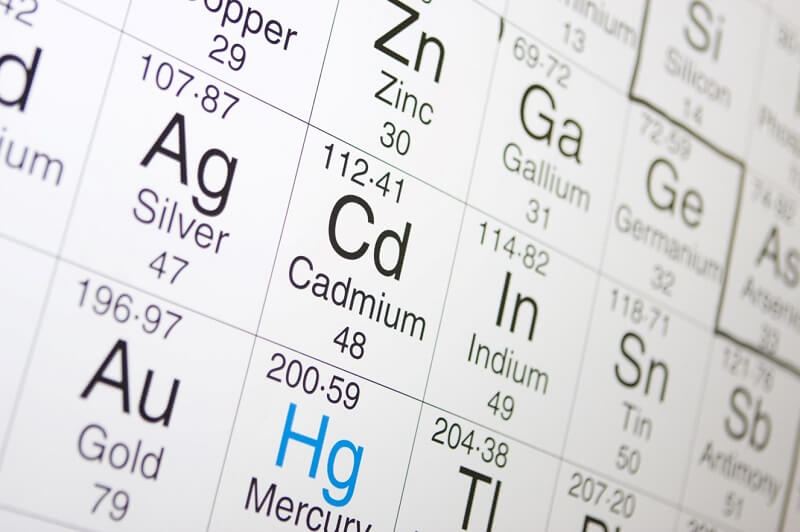 The presence of heavy metals in foods is a timely issue, involving contamination of the food chain and harm to public health

Contamination of foods by heavy metals has a number of different sources. The most significant ones are: contamination of the soil from which foods are produced; residual muds; chemical fertilizers and pesticides used in agriculture; the use of other materials; etc. Since this contamination has so many different sources, there is a wide range of foods contaminated by heavy metals, including products of plant origin (cereals, rice, wheat, edible roots, mushrooms, etc.) as well as foods of animal origin (fish, crustaceans, mollusks).

In particular, fish is one of the products most affected by heavy metal contamination, because heavy metals are bioaccumulative in the food chain. When heavy metals accumulate in waters, fish ingest them through their diet and accumulate them over the course of their lives. The heavy metals then reach the consumer when that fish is consumed.

Many high-density metals are not especially toxic. Several of them are actually essential elements for human beings, though at certain concentrations they may be toxic in some of their forms. However, there is a series of elements that, regardless of their form, could represent a major environmental problem. These are commonly referred to with the generic term “heavy metals.”

The danger of heavy metals is especially severe, because they are not chemically or biologically degradable. Once released into the environment, principally due to industrial or mining activities, they can remain for hundreds of years, polluting the soil and accumulating in plants and organic tissues. Moreover, their concentration in living beings increases as they move up the food chain.

Among the most significant heavy metals from the point of view of health are mercury, lead, cadmium, nickel, and zinc. Some intermediate elements such as arsenic and aluminum, which are highly relevant from a toxicological point of view, are generally studied together with heavy metals.

– Mercury (Hg). Mercury is considered to be a highly toxic heavy metal. It can be present naturally in metallic form (as mercury), or in the form of mercury salts. Mercury is highly volatile; when it is present in the air, we can breathe it in through our lungs or absorb it through our skin. The most dangerous form of exposure is inhaled mercury, since it enters our body, accumulates, and remains for a long time.

One thing that should be borne in mind is that mercury ought not be present in the food chain at all. It is not a natural element in foods. But it can enter our bodies through fish, because fish consume large quantities of mercury, which is one of the most prevalent heavy metals in seas and rivers. Mercury can also enter our bodies through plant and animal products, given that it travels and accumulates in the soil. Such mercury is generated by human activities, for instance: mining, foundries, agricultural fertilizers, wastewater discharge, and the burning of solid waste.

– Lead (Pb). Lead is a metal often used in residential installations and in metal alloys or chemicals, such as pipes, the manufacturing of paints, putties, and pesticides. It is one of the heavy metals that can most easily contaminate us.

Lead is extremely harmful to health. It is one of the heavy metals that has caused the most harm to the population. Lead enters the body through vegetables, meat, fruits, seafood, and wine (among many other foods contaminated with heavy metals). Tobacco smoke is another pollutant with a high concentration of lead.

– Cadmium (Cd). Cadmium (in its majority) comes from zinc refining processes. It is a residual or a by-product of zinc.

Cadmium is mainly present in the earth’s crust and is strongly absorbed by the organic material that forms the soil. This fact itself poses the greatest danger, because such cadmium deposits, absorbed by the soil’s organic material, pass into plants, and often form a part of human or animal diets in the form of hazardous heavy metals.

The foods that are potentially most susceptible to cadmium contamination are mushrooms, shellfish, freshwater fish, dried algae, and potable water, among others.

Smokers (those who actively smoke and those who breathe in second-hand smoke) are heavily exposed to cadmium, as are people who live near waste dumps or factories that release cadmium into the atmosphere. Workers at metal refineries can also be exposed to cadmium and other heavy metals.

– Copper (Cu). Copper is a mineral of great importance for the development of human life. Care should be taken to include this element in one’s diet, but in its rightful measure. In high doses, copper is considered a heavy metal and provokes severe health disorders, such as anemia, stomach problems, and harm to the kidneys and the liver.

Copper is prevalent in our homes in pipes and cookware. From there, it passes into water and cooked foods. Copper is massively used in industry, which is why exposure to copper has become much higher than normal.

A curious tidbit of information is that when tea is consumed in excess, if copper is not included in the diet, a person could suffer from copper deficiency, which causes extreme fatigue.

– Chromium (Cr). Chromium is a heavy metal whose principle means of absorption is contact with the skin. Overexposure to chromium can also occur through diet and breathing, though less frequently.

Chromium VI can alter the genetic material of cells and cause cancer.

Chromium III is an essential element for human life in small quantities. In fact, chromium deficiencies can cause metabolic disorders, heart problems, diabetes, etc. However, in concentrations that are too high, it can cause severe liver problems, kidney problems, problems in nerve tissues, and circulatory problems. Skin irritations and ulcers also occur.

The greatest concentration of chromium is found in water and plant-based foods. Although Chromium III is necessary for life, the way foods are prepared or stored can alter Chromium content, increasing its concentration. This is highly dangerous for health, since heavy metals are involved.

– Nickel (Ni). Nickel in its rightful measure is a metal highly necessary for life, an essential mineral for the formation of red blood cells. But when we inhale, ingest, or absorb it in excess, nickel can become extremely toxic (depending upon the quantity), affecting our lungs, larynx, and nose, and can also compromise the prostate and the heart.

Nickel is a metal used in steel alloys and is also present in very low amounts in the environment and the food chain. Nickel poisoning or contamination would require a very high consumption of this element. Such poisoning tends to occur when foods are grown in highly contaminated soils, on account of which large amounts of heavy metals pass into the food chain.

– Selenium (Se). Selenium is another metal that occurs naturally. It is very important for our bodies in its rightful measure. In foods, this fundamental element for life is found in meat and cereals. Natural foods usually contain the quantities that the body needs to avoid selenium deficiencies, which are associated with several health problems, among them, erectile dysfunctions. Overexposure to selenium can be considered a form of heavy metal contamination.

We can be exposed to selenium poisoning in the same way as occurs with other metals: by ingesting food that contains selenium in excess amounts due to contaminated soils and/or waters, by inhaling selenium-contaminated air, ingesting water, or through the skin.

Overexposure to selenium can occur in places where people work with paint, in the metal industry, or when selenium is released into the atmosphere through the burning of coal or oil.

– Aluminum and Arsenic. At times, when discussing heavy metal contamination, mention is also made of lighter elements, such as arsenic or aluminum.

Aluminum is an element whose specific weight on the periodic table is not greater than 5 g/cm3 and whose atomic number is not greater than 20 (it does not have sufficient density to be called “heavy”). However, due to aluminum’s toxicity, it is included as one of the heavy metals on some lists of toxins. We should not lose sight of the fact that aluminum is quite abundant in nature, only surpassed by oxygen.

Arsenic is the most common cause of acute heavy metal poisoning in adults. Arsenic is not a metal, but a metalloid (which basically means that it has both metallic and non-metallic properties). It is released into the environment by industrial processing of chemicals and glasses, and reaches water supplies throughout the world, creating exposure for marine life.

The FDA actively supervises heavy metal levels in food supplies. The FDA is taking a systematic approach to reducing risks posed by these metals, especially for vulnerable populations such as infants and children, who are the most susceptible to some of their harmful neurological and developmental effects.

AGQ Labs USA uses an ICP-MS to test water and foods and an ICP-OES to test soils, vegetation, and food additives for heavy metals. Our ICP-MS allows us to detect heavy metals at ultra-low levels to help ensure you comply with Prop 65.